Who would have ever thought???

I don’t have access to all of the sophisticated spy gadgets and high-tech surveillance equipment that most governments do; BUTT I said when Obama agreed to that biggest WHORE DEAL in political history; it was a bad move and Iran would NEVER keep their word.

Based on who Iran is, the track record of their leaders, their consistent pathological lying; how could they ever be expected to keep up their part of any agreement.  For that matter, the agreement was so one-sided in Iran’s favor, it was almost laughable. I would not even call it an agreement. I would call it an arrangement.

All because of Obama’s gigantic ego, desire to get his names in the history books for something constructive, and who knows what else his other motivations were. There is much speculation as to his attachment to the Muslim people is why, he literally sold the ENTIRE WORLD  down the tubes.

What really amuses me; Iran is run by people who call themselves HOLY MEN.

I did many  posts at the time on the illogical mentality behind Obama’s insatiable  desire to have a DEAL written. He had John THE PUPPET Kerry literally on his knees begging to get the X on the document. The man literally gave away the candy store and 151 BBBBBillion dollar$ to go with it; all based on the words of the lying,  conniving, cunning, despicable leaders of Iran.  Many times I asked the question: WHOSE SIDE IS OBAMA ON???

There is no other person in the world, as ridiculous enough to essentially pay someone/some country to help wipe out their own people. That is exactly what Obama did.  The proof is staring us in the face; just take a good look at Netanyahu’s video.

It is astounding to me that 90% of the world saw well beyond the deal and its disastrous complications; all except Obama and his crew. There has to be more to this than meets the eye. Possibly the truth will be showcased in his 1.5 billion dollar library when it opens; BUTT don’t hold your breath.

How can Obama walk around with his head up in the air, being paid crazy amount$ for speaking engagements, when he deliberately made the mistakes he did while sitting in the Big Chair??  Possibly, someday, the real truth of the Manchurian Candidate will come out. If The Iran WHORE DEAL was the only disaster he inked; that would be enough.

Can we even imagine the field day the other side would have if PDT made a move like this??? 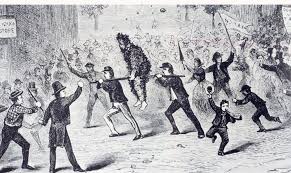 Now the New Sheriff in town has inherited the mess Obama made. In his attempt to do the clean-up, all the fools and Boulder Rollers are coming out of the closet breaking his balls and trying to run the guy out of town on a rail.

Way back when  I said when the WHORE DEAL was signed; we would not know for a few years the severity, aftermath and disastrous consequences of this ignorant and deliberate move. The time may be getting closer.

COMMON-SENSE is the name of the game Addressing topics other bloggers shy away from. All posts are original. Objective: impartial commentary on news stories, current events, nationally and internationally news told as they should be; SHOOTING STRAIGHT FROM THE HIP AND TELLING IT LIKE IT IS. No topics are off limits. No party affiliations, no favorites, just a patriotic American trying to make a difference. God Bless America and Semper Fi!
View all posts by The Goomba Gazette →
This entry was posted in bad choice, Foreign countries, Foreign News, Obamamess, Stupid government moves, weapons of mass destruction and tagged We are sitting on a powder keg. Bookmark the permalink.