50 years ago yesterday: Cassius Clay shocked the world by beating Sonny Liston for the heavyweight championship of the world.

On February 25, 1964, an upstart American boxer named Cassius Clay who won the 1960 Olympics “shook the world” when he put out the lights of Sonny Liston and claimed the heavyweight championship of the world.

Little conversation was made about the “outcome” of the fight at that time except utter shock that this loud mouthed, brash kid from Kentucky Cassius Clay beat Sonny Liston for the heavy weight championship of the world. Most people thought it was an impossible task. 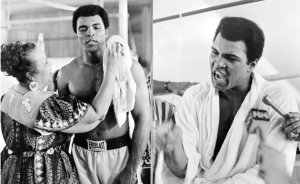 That victory  was the last time Clay fought under his real name; announcing after the fight  he was joining the religious black power movement, the Nation of Islam and changing his name to Muhammad Ali.

Clay ran his mouth for months before the fight, selling Liston wolf tickets every chance he could and he got into the ex-con Liston’s head even before Clay “rang” Liston’s bell. 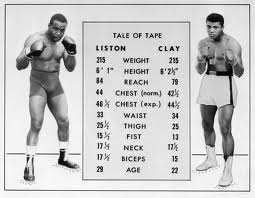 The fight ended when Liston’s corner threw in the towel after what I called the “invisible punch”  launching Clay to international fame dubbing himself “The Greatest.”

It shocked the world that Liston, a massive man and a hardened street savvy person could get beaten by this loud mouthed, obnoxious kid Cassius Clay.

The Black Muslims jumped on the band wagon right away and talked Clay into joining their cause. At that time he dropped the name he was born with and took on the name Muhammad Ali. What a shot in the arm for the Black Muslims.

For decades the FBI had reason to believe a Las Vegas figure linked to both Liston and to organized crime may have had a hand in the fix that defeated champ and put Liston into retirement before round eight.

It is believed that Liston and his “associates” got one million dollars each for him fixing the fight. Liston died in 1970 and took the secret to his grave.I called it the “invisible punch”.

Take a look at the video and tell me it was not a fix.

At the time the Viet Nam war was in full swing. The new heavy champ of the world became a conscious objector and refused to join the service based on his new religious beliefs. Was that the true reason or not can still be debated. I say the Muslims got into his head.

Instantly, Ali became a villain throughout the country but held fast to his convictions. He did not do any jail time but he was stripped of his championship belt and was banned from fighting for four years.

I am one of the people that disliked Ali intensely, not for his stand on the war but the fact that he would not serve  his country. Now that we look back on history, the United States had no business in Viet Nam. This does not sanction Ali’s stand. Many others that objected to wars and did serve their country as Ali could have in a non-combat role.

After his suspension Cassius Clay went on to be one of the all-time best in the fight game with a record of 56 wins and 5 losses.

After I got over the conscious “objector thing” I formed a great deal of respect for Ali because of the way he treated all the kids in the world. When it came to the “little ones” he was completely colored blind. He is very quick witted, a humanitarian and in my opinion a stand-up citizen that has done a lot of good around the world.

I will agree that Ali was “one” of the best in the boxing world of all times but has to be second best.  I will have to give that distinction to “The Brockton Brawler” Rocco Francis Marchegiano (aka Rocky Marciano) who holds the all-time record of 49 – 0 with 43 knockouts. A record that still stands today.

Through the years there was some speculation in the fight game as to whether Ali or The Rock was the best. To settle the dispute a few business men go together and produced a computer generated fight. The Rock came out on top.

After watching the film, Ali who has a tremendous sense of humor told reporters “That computer was made in Alabama,”.

A lot of credit has to be given to Ali and his performances in and outside the ring. He is a man who not only could sell Wolf Tickets but he could buy them as well. He probably did more for the fight game than most any other fighter in history.