They are Raining in on Ray’s parade

Ex-Mayor Nagin, once the public face of post-Katrina recovery, now on criminal trial:

The hogs never get enough to eat, that is why they are called hogs.

After being out of office for three years the long arm of the law came down on Ray Nagin the onetime powerful mayor of “the Big Easy and once a thief in office.

This is not the first time Nagin has been under the micro-scope for crossing the financially ethical lines but this time Uncle Sam is charging him  theft relating to the aftermath of the deadly and destructive storm Katrina that destroyed New Orleans where he “took care” of some people that “took care of him”, naturally not with his money.

In all there are 21-counts leveled at him, which includes bribery and wire-fraud charges and theft in office. If they get him on 6 counts he will 141 when he gets out.

There had to be someone in the mix that got pissed off because they didn’t get their cut and sent the hound sniffing after the ex-mayor.

So far there have been 5 people convicted for their part in the connected crimes; two former city officials and two businessmen and a prison sentence for a former city vendor.

Ray Nagin was not an “cheap buy”, he was a man of principal and only accepted payoffs and kickbacks in the highest denominations.

Just one of his illicit transaction netted the high rolling crook more than $160,000 in bribes and truckloads of free granite from a businessman named Frank Fradella; who for his part in swindling the city secured millions of dollars in city contract work after the hurricane. It is called “you scratch my back and I will steal from the city”.

One of the most amazing thing about these high rolling crooks is that a good majority of the are wealth men to start with but have an insatiable appetite for power, lust and gigantic egos to feed.

EVERYONE in this world has taken a 2×4 from the job at one time or another but when they take the whole truck load that is when the red flag goes up – it is called greed.

There is no doubt in my mind that there are 100’s if not 1000’s of political crooks out there that haven’t be caught yet. Smile guys you are on candid camera.

By the time Ray gets out of the cross bar hotel he will be too old to get excited over the “ladies of the night” hanging over the baloney, throwing beads at him.

At one time he was the King of these streets, now he may be sweeping them after the parades with a prison chaser behind him.

I am sure that Ray will be right at home in the slams. There even may be some people he can “hang with” that he helped send up when he was in office. I bet they can’t wait to see him. 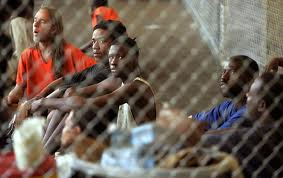 Here is another crook that had the world by the ass and didn’t know it. He went from eating Creolo Gumbo every night and going to licking the crumbs out of a tin plate.

COMMON-SENSE is the name of the game Addressing topics other bloggers shy away from. All posts are original. Objective: impartial commentary on news stories, current events, nationally and internationally news told as they should be; SHOOTING STRAIGHT FROM THE HIP AND TELLING IT LIKE IT IS. No topics are off limits. No party affiliations, no favorites, just a patriotic American trying to make a difference. God Bless America and Semper Fi!
View all posts by The Goomba Gazette →
This entry was posted in corruption, Crime, Greed, Politics and tagged Ray Nagin. Bookmark the permalink.