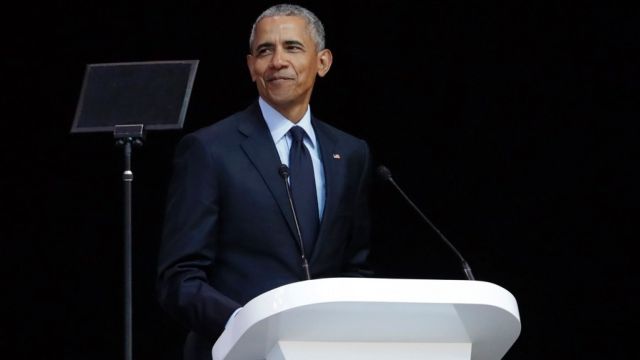 The only thing missing is his halo.

Is this guy out of his mind??  He surely can not believe in all of the utter-nonsense and poisonous rhetoric he has been touting.  No one BUTT a fool or someone looking to destroy this country could have a mentality as twisted or irrational as his.  It is so hypocritical, it is out of the question. If actually implemented, universal income would be the ruination of the USA.

Way back when I said; Obama was The Manchurian Candidate and now I believe it.  This man was hand-picked by some very wealthy people and supported into politics to destroy the USA and all of the values that once made it great. He has tried every trick in the play book to undermine the stability of our government, sometimes with some success and in other areas he has not succeeded.  Now that he is sucking up all the free-bees he arranged for when sitting in the Big Chair, living high on the hog, Obama is touting an insane suggestion of universal income. His deranged mentality has no boundaries.

I don’t think there has ever been such a flagrant example for the destruction of this country as Obama is suggesting.  He is beyond common-sense and reality, literally recommending that everyone in this country be paid a salary (universal income) and not having to work for it.  How can anyone in his position, who has so many people mesmerized with his holier then thou facade, in good conscience suggest a monstrosity like that???

Layman’s terms; # 1 Obama is breaking PDT’s balls because he sees what The New Guy has achieved, so much in such a short amount of time, accomplishments Obama could only wish for. # 2, he has to be out of his mind suggesting a “universal income.” that would literally destroy this country

What is basic income? | BIEN or Universal income

I have never in all my life heard anyone, let alone a DUDE that was the president of the USA contrive such a ridiculous undertaking it would destroy the USA. Unconditional: it is paid without a requirement to work or to demonstrate willingness-to-work.

To start and end with, it is economically impossible for any country to have universal income. How could they afford it?  Theoretically, if  no one is working, no one is paying taxes to keep the government going.

This move  is exactly what the premise of the movie The Manchurian Candidate was all about.  Destruction from within.  An enemy of the people in disguise.

Does anyone with a speck of common sense have ANY idea what an arrangement like that would do to the USA?? Guaranteeing ALL of its citizens receive a paycheck that they do not have to work for?? In the name of all that is sacred, the guy is a mad man. Unconditional: it is paid without a requirement to work or to demonstrate willingness-to-work.

Obama, meanwhile, on Tuesday seemed to embrace some talking points of the resurgent progressive left — including opening the door to proposals for a guaranteed income. One such proposal is being considered in Chicago.

“It’s not just money a job provides,” Obama said. “It provides dignity and structure and a sense of place and a sense of purpose. So we’re going to have to consider new ways of thinking about these problems, like a universal income, review of our work week, how we retrain our young people, how we make everybody an entrepreneur at some level. But we’re going have to worry about economics if we want to get democracy back on track.”

This silver-tongued person is a danger to society. He is pushing agendas that he knows are absolutely insane and impossible to implement, BUTT has millions of parasitic followers out there that are taken in by his pious demeanor.

As it stands, our government, because of Obama and some of his predecessors have put the USA in such a deep hole,  we probably will never see the light of day. NOW,  The Manchurian Candidate wants to pass a law/bill where everyone in the country receives a paycheck, BUTT no one is compelled/obligated to work for it.

It is total anti-American – illogical – damning – undermining the government – destabilizing – grossly unreasonable, that a man in his influential position could ever come up with such a off-the-chart suggestion.  He definitely needs some serious help as to where his loyalties stand as an American.

It is mind-boggling that someone as dangerous could be let loose to poison the minds of millions of people. 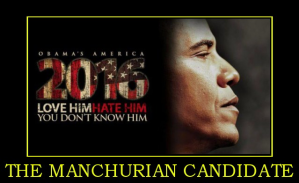 The conspiracy  move was to put Obama in office was a cold and calculated in an attempt to take over the USA with an extreme far-left mentality.  No one in his present position or as president could be as irresponsible as he has been without a direct motive.  Just the suggestion of his of universal income speaks volumes of his twisted logic.

There were several times in the beginning of his presidency I gave Obama some slack with some of his mistakes and thought he may just be getting his feet on the ground as the new president.  Little did I know, he knew what he was doing right out of the gate and to this day is still trying to destroy the system from the outside.

Anyone in his influential  position that would come up with an outlandish recommendations as he has, one that would destroy our country, has to be one of the enemy!!!  Give me just one other explanation as to why not.

Let us not forget, Obama funded Iran so they could destroy this country.  Explain that one.

COMMON-SENSE is the name of the game Addressing topics other bloggers shy away from. All posts are original. Objective: impartial commentary on news stories, current events, nationally and internationally news told as they should be; SHOOTING STRAIGHT FROM THE HIP AND TELLING IT LIKE IT IS. No topics are off limits. No party affiliations, no favorites, just a patriotic American trying to make a difference. God Bless America and Semper Fi!
View all posts by The Goomba Gazette →
This entry was posted in anti-American, anti-everything, anti-patriotism, Anti-Trump, arrogance, corruption, Crime, dangerous territory, Evil, insanity, Obamamess, Opinion, PC insanity, Politics, scam artists, The world we live in, wake up America and tagged The Manchurian Candidate. Bookmark the permalink.