There is a fool born every second.

Some dummy is walking by a lamp that does not have a bulb in it and wonders what will happen of he stick his finger or another body part in the empty hole.

Another fool wonders what will happen if he tries to run across the freeway at rush hour.

The third dummy is playing hatchet chicken with a friend of his and cuts his thumb off.  He won the contest but lost the thumb.

Learn by others mistake. It doesn’t hurt as much.

So far, I think everyone gets the gist of the post. Don’t do foolish things, be respectful, treat others as you would have them treat you, look both ways before crossing the street of life, use good common-sense, think before acting, don’t make the same mistake twice, be a good listener not a poor tweeter, be smart enough to learn from others mistakes, don’t go where you don’t belong and don’t trust anyone (trust is earned not arbitrarily given). There may be a few I overlooked. If we follow those simple rules of common-sense, we should go through life relatively safe.  Learning from others mistakes, that is a biggie.

Take Germany for instance. They are so far up to their eye balls in quicksand with the immigration situation, BUTT don’t have sense enough to pull back. If they continue down this road to disaster they are on, the quicksand is going to be the victor. 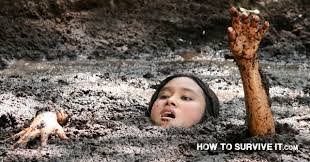 They have a bunch of fools that lead their country who are the poster children of not playing with a full deck.  If Germany continues on it’s present trend with their immigration policies, by the year 2020 they will have spent 100 billion dollar$ or more.

Despite the financial burden on Germany, the crime rate among the immigrants is less than desirable; yet they continue to keep the flood gates open.

It is a fact of life and a primal instinct to take care of your own  people before you take care of someone else; some thing that many world leaders are not in-tuned to.

Belgium – Canada – Greece – Iceland – Ireland – Italy – Japan – Pakistan –  Saudi Arabia –  The UK – Venezuela, all have severe immigration problems. Most of them are not wise enough to see the aftermath of the guy in front of them sticking  his finger into the open light socket.

The dire situations these host countries are facing with the immigrants would not be as unpalatable if the people that were entering their countries were stand-up, solid citizens who would be an asset to their new country rather than a deficit.  Like Castro did, they are mixing some of the worst of the worst they want to get rid of.

What is the solution?? That is the question of the century. I don’t have the answer; except, charity begins at home and take care of your own before taking care of others.

If by taking these people in, it would be the final solution to their problem, it may be worth it.  Many of these countries have been fighting the same wars, with the same people, for the same redicilous reasons, many times in the name of their God, for 1,000 years and it is not going to ever change.

On another note of self-preservation.

Ever since PDT announced that he is going to spend over a trillion dollar to repair our infrastructure, some of the countries across the pond have their hands out looking for what they think is their slice of the pie.

If PDT  and company does capitulate and does di$h out ANY money to these countries, I will be very disappointed. We are the only country on the planet that is 23 trillion dollar$ in debt, YETTTT; we see fit to keep throwing good money after bad.

Wake up America, before there is none. The Romans were also very arrogant and did not think their Empire could crumble.  Never say Never!!

COMMON-SENSE is the name of the game Addressing topics other bloggers shy away from. All posts are original. Objective: impartial commentary on news stories, current events, nationally and internationally news told as they should be; SHOOTING STRAIGHT FROM THE HIP AND TELLING IT LIKE IT IS. No topics are off limits. No party affiliations, no favorites, just a patriotic American trying to make a difference. God Bless America and Semper Fi!
View all posts by The Goomba Gazette →
This entry was posted in common sense, foolish people, Foreign countries, immigration, The world we live in and tagged Learn by others mistakes. Bookmark the permalink.