Kerry is a Traitor …

Kerry is a traitor and whomever sent him to Iran (let me take a guess) should wear the jacket of shame as well. 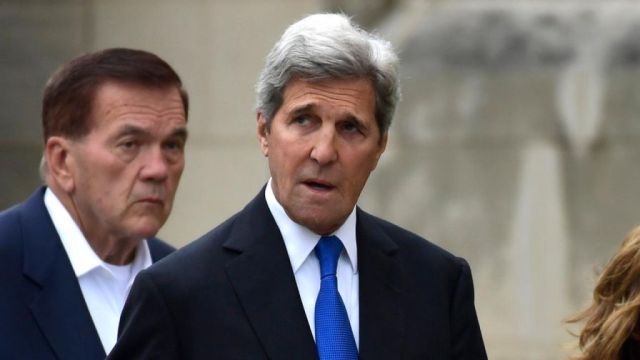 According to Fox News:

“John Kerry is out giving advice to Iran about how to maneuver around what Donald Trump is doing, it’s insidious,” Ari Fleischer, the former White House press secretary for George W. Bush, said Wednesday on Fox News’s “Special Report.” “I don’t know if it’s legal or illegal, I don’t care about that side of it. It’s wrong.”

Obama can not let go of the fact that he is not the president anymore and that CHC, his protegé, got her ass kicked in the election.

As we have witnessed in recent months, the DUDE is stirring up the political pot where ever he can.  The first few month after the election he was almost invisible, sucking up all the perks that come with being the X.  Now that his tired of sticking his toes to the sun, he is out there breaking PDT’s balls  as many ways as he can, trying to undermine everything PDT does, if not directly, indirectly.

The latest maneuver, sending that CORN EATER to Iran, really demonstrates just what The Manchurian Candidate and his team of traitors are really made of.  There is absolutely no way that Kerry is smart enough or would have the courage to pull of anything like this by himself. He is one of the biggest obsequious fools on the planet.

Many may be curious as to what my definition of a CORN EATER is. A CORN EATER is a chicken that follows a pig around the farm-yard eating the corn out of the pig’s droppings.  I am sure you get the picture.

Is Kerry and whomever is behind him really breaking the law??

Any person who
(1)
aids, or attempts to aid, the enemy with arms, ammunition, supplies, money, or other things; or
(2)
without proper authority, knowingly harbors or protects or gives intelligence to, or communicates or corresponds with or holds any intercourse with the enemy, either directly or indirectly; shall suffer death or such other punishment as a court-martial or military commission may direct.
This section does not apply to a military commission established under chapter 47A of this title.
(Aug. 10, 1956, ch. 1041, 70A Stat. 70; Pub. L. 109–366, § 4(a)(2), Oct. 17, 2006, 120 Stat. 2631.)
Why is every other citizen in the USA bound by these rules, BUTT TMC (The Manchurian Candidate) and his sheep are not???
Does 10 U.S. Code § 904 – Art. 104.describe exactly what Kerry the sheep and his Shepard are doing??
I am trying to figure out when PDT is going to get off of his ass and start prosecuting these law breakers??  By their illegal actions, they are putting the USA into more dire straights than we are in already.  If PDT does not make an example out of a couple of these anti-Americans, this undermining treachery will continue.
Not only is every country in the world attempting to put the screws to the USA, we have some of our supposed hierarchy assisting them.  What new, TMC gave the enemy in excess of 152 billion dollar$ that they are using aganst us.  Please, someone justify that to me.
If it was not for the fact that TMC  so aggressively backed/supported CHC in her election campaign, he would have not taken her defeat as hard as he did. Essentially, TMC views CHC’s defeat as an ass whipping he took and he does not like it.
The way I see this, THE OTHER SIDE has gone way beyond what I would consider legal and acceptable.
Look at what Kerry is doing objectively, with good old common-sense and the exclusion of part affiliations; are his actions illegal and out of line??
GMAFB
If it were PDT trying to pull some back-door shenanigans like this, they would have crucified him already.
TMC is still getting all of what he can out of being a black president. He knows all well and good that not many people will challenge him or publically disagree with him for fear of being labeled a racist. Let me give you a clue. I could care less if TMC is/was green – blue or yellow; all I ever expected from him, as I do PDT, to do the job they were elected for. It has absolutely nothing to do with race.
COMMON-SENSE

COMMON-SENSE is the name of the game Addressing topics other bloggers shy away from. All posts are original. Objective: impartial commentary on news stories, current events, nationally and internationally news told as they should be; SHOOTING STRAIGHT FROM THE HIP AND TELLING IT LIKE IT IS. No topics are off limits. No party affiliations, no favorites, just a patriotic American trying to make a difference. God Bless America and Semper Fi!
View all posts by The Goomba Gazette →
This entry was posted in anti-American, Anti-Trump, arrogance, Crime, dangerous territory, Foreign policy, Obamamess, Power and tagged Call them like you see them!!. Bookmark the permalink.