Democrats Silent On Biden’s Creepy Touching, Allegations He Got …

https://www.dailywire.com/…/democrats-silent-bidens-creepy-touching-ryan-saavedra
One of those men is former Vice President Joe Biden, whose creepy behavior … that he repeatedly got naked in front of female Secret Service agents who … Biden has a habit of swimming in his pool nude,” Mr. Kessler writes, …
Is it Jokin Joe, OR should we call him Joe the Mauler?? 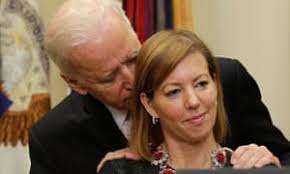 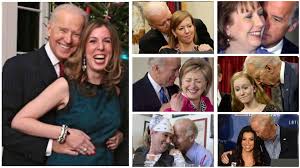 By all appearances, the lady on the left is highly pissed off with Joe the Maulers advances. A picture says a thousand words.
Jokin Joe has a propensity of pushing himself on the opposite sex.  He really believes he is god’s gift to women!! By the looks of it, ONLY CHC and a couple of others don’t seem to mind his out-of-line behavior. Probably a DC thing.
In this day and age of the sensitivity towards sexual harassment, I would think,  JJ who  has crossed the line many times, would be a little more discrete with his interactions with the ladies.
While every Tom – Dick & Harry  are getting slammed for their inappropriate behavior, JJ seems to get a pass because he was the VP of the USA.
Some of the positions he has been caught on camera doing are far worse than some other men who have gotten the OLD HEAVE-HO for their inappropriate behavior.  These are ONLY the incident that were caught on camera, how many other indiscretions by JJ went unnoticed??
I am not suggesting that The Donald is or was a saint when it came to the fairer sex, just that JJ has no room to bad rap anyone. He should save all of his energy for his head to head confrontation with CHC,  running for The Big Chair in 2020.
With the far left as it is, what is good for the goose isn’t good for the gander. He has never received the criticism or been held accountable for his actions.
There is no better example of hypocrisy and favoritism than Wild Bill’s speech on immigration.
https://www.youtube.com/watch?v=m3yesvvYEvs
The exact same speech WB was cheered for, PDT was chastised for.
That is the dirty game of politics. The politicians continually keep throwing shit at the wall and hope some sticks of it sticks when election time rolls around.  Many times deliberately lying through their teeth knowing what they are saying is untrue or an impossibility.

COMMON-SENSE is the name of the game Addressing topics other bloggers shy away from. All posts are original. Objective: impartial commentary on news stories, current events, nationally and internationally news told as they should be; SHOOTING STRAIGHT FROM THE HIP AND TELLING IT LIKE IT IS. No topics are off limits. No party affiliations, no favorites, just a patriotic American trying to make a difference. God Bless America and Semper Fi!
View all posts by The Goomba Gazette →
This entry was posted in absolute nonsense, Anti-Trump, arrogance, dirty politics, far-left fools, Politics and tagged JOKIN JOE GOTTA BE JOKIN. Bookmark the permalink.