These BOYS just can’t keep their zippers up ….

Scott Vetere, 39, was arrested on Oct. 8 in the parking lot of an Ann Arbor (Michigan) apartment complex after police officers witnessed him and a female gymnast, 18, performing a sex act in a car, according to the police report.

Vetere was arraigned on Oct. 19 on the charges and will be in court again on Nov. 14.

The female gymnast also was arrested. Court records show she is also charged with committing an indecent or obscene act in public. She is scheduled for arraignment on Nov.

When the cops saw a head bobbing up and down in a parked car like someone was bobbing for apples, they investigated and found Vetere getting his pipes clean by one of the student that attended the school where he taught.  Even though the student was over 18 years old and considered in most cases a legal age, there is a law against sexual interaction between teachers and students. 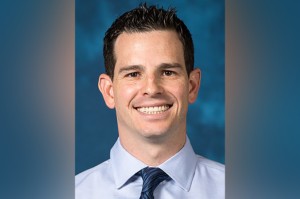 These days, Scotty Boy is not smiling was much as he used to.

By now, I would have thought most of these oversexed teachers, male and female alike, would have got the message already; it is a no no having sex with one of their students.  BUTT who ever said all teachers are smart??

They are almost as ignorant as the rogue cops that continue to beat up people while they know the camera is rolling. Stupidity must be a contagious mental illness that has no boundaries.

COMMON-SENSE is the name of the game Addressing topics other bloggers shy away from. All posts are original. Objective: impartial commentary on news stories, current events, nationally and internationally news told as they should be; SHOOTING STRAIGHT FROM THE HIP AND TELLING IT LIKE IT IS. No topics are off limits. No party affiliations, no favorites, just a patriotic American trying to make a difference. God Bless America and Semper Fi!
View all posts by The Goomba Gazette →
This entry was posted in fools, sex, The world we live in and tagged NOT THINKING WITH THE RIGHT HEAD. Bookmark the permalink.