You get what you pay for!!

Hollywood may have laughed when Emmy’s host Michael Che said the only white people who thank Jesus are “Republicans and ex-crackheads,” but Tinseltown’s latest middle finger to Middle America fell flat in flyover country, and may have contributed to the telecast’s all-time low viewership. 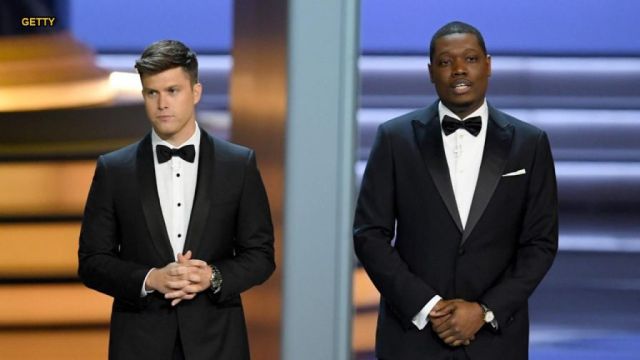 Where the hell did these two bums come from; Minute Man Employment Service??

Che, the black fool on the right, his honky side kick on the left and all the fools in the audience that appreciate that kind of tasteless humor are all mentally disturbed.  In the video, Alec Baldwin seemed to be enjoying the program the most. Does that tell us anything??

This is the end result when quotas are trying to be filled and cheap help is hired.  You get what you pay for.

Having an opinion and expressing it is healthy , as long as when it is given intelligently and with respect. That is a sign of a person with good character. BUTT when fools stoop as low as the left-wingers and most of the democratic party has just to get to PDT, all they are accomplishing is demonstrating  how ignorant they really are.

I wonder if Mr. Che would take offense if someone was bad rapping the black community?? This double standard we have in this country is way out-of-wack.

Some fools really believe that many of the white race are the only racists. I have a news flash. I would wager, percentage wise; the black community is substantially more racist than the white race is.  One reason being, they always have some of their FINEST lighting a fire under them and getting them stirred up.

Then the idiot Che had to bring religion into his tasteless sense of humor.  He dumped gasoline on a volcano.  What this idiot considers comedy,  has a lot to be desired.

The Boulder Rollers talk about PDT not having a filter, when was the last time or ever, did we heard Trump telling someone to go fuck them self??? If you are going to tell the tale, tell it like it is.

They are like a 5 year old kid. The more attention they get and the more fools that laugh at their antics, the more they will continue attacking the out-of-bounds areas.

They all are immature and disgraceful.

COMMON-SENSE is the name of the game Addressing topics other bloggers shy away from. All posts are original. Objective: impartial commentary on news stories, current events, nationally and internationally news told as they should be; SHOOTING STRAIGHT FROM THE HIP AND TELLING IT LIKE IT IS. No topics are off limits. No party affiliations, no favorites, just a patriotic American trying to make a difference. God Bless America and Semper Fi!
View all posts by The Goomba Gazette →
This entry was posted in anti-everything, Anti-Trump, bad choice, Birds of a feather, far-left fools, Humor, Opinion, race relations, The world we live in and tagged Fools at their finest. Bookmark the permalink.