Time for the pasture ….

This is exactly what I am talking about.

NO ONE should EVER be appointed to any job for life. Age is one big factor as we have seen with many of the old codgers in the Supreme Court that were on the brink of senility, BUTT still maintained a position of critical decisions making.

Supreme Court Justice Ruth Bader Ginsburg revealed on Sunday she hopes to remain on the court’s bench for at least five more years.

“My senior colleague, Justice John Paul Stevens, he stepped down when he was 90, so think I have about at least five more years,” Ginsburg, 85, who described herself as a “flaming feminist,” said at an event in New York City, according to CNN.

People like Ginsberg are very selfish people, to stubborn to move over and give someone younger a shot at the job. She is the only one that does not know it because she has slept through a better part of her career. 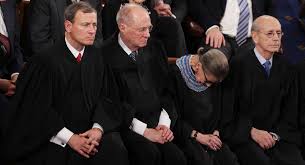 Let us be realistic. After a person gets to a certain age in life, they are not firing on all 8.  Some are exceptions to the rule, BUTT for the most part, most people in their 80’s have seen better days.

The old girl referes to herself as a flaming feminist. I would say her flame burned out sometime ago!!

COMMON-SENSE is the name of the game Addressing topics other bloggers shy away from. All posts are original. Objective: impartial commentary on news stories, current events, nationally and internationally news told as they should be; SHOOTING STRAIGHT FROM THE HIP AND TELLING IT LIKE IT IS. No topics are off limits. No party affiliations, no favorites, just a patriotic American trying to make a difference. God Bless America and Semper Fi!
View all posts by The Goomba Gazette →
This entry was posted in arrogance, ego, Government and tagged Time for a hike. Bookmark the permalink.

1 Response to Time for the pasture ….