The report details cases going back decades in six of Pennsylvania’s Roman Catholic dioceses and includes allegations of cover-up efforts, the court said.

All the while, the priest around the country and around the world are begging/pleading for the congregation to keep dropping dead presidents in the collection basket, some of whom are either committing the sex crimes themselves or are aiding and abetting the perverted pedophile priests in the commission of their crimes.  Yes, the same pervert priest that heard your confession and gave you 5 Our Fathers and 5 Hail Mary’s for using vulgarity.

It is not bad enough that these sick crimes are committed by cowards of the cloth, they have a support group in the wings covering up for them. Who is worse, the perpetrator or their silent accomplishes??  I might say the accomplishes are worse. If they would have dropped a host on these sick bastards much sooner, that would have cut down the number of kids molested by 90%.  It is all about the dead presidents.

I have done so many post on this disturbing subject it is sickening. BUTT as many as I do, I still have a hard time getting into these degenerate creeps heads and their protectors to see what makes them tick.

To put it in a nut shell, the perps and their cover-up support group are a bunch of low-life, sick in the head, demented bastards.  If anyone in the world should know right from wrong, don’t we think it should be a priest, a bishop, cardinal or the pope??

Accountability should start from the top down. From the popes that concealed the truth for centuries/decades, to the low-life parish priest that kept their lips sealed. It is all about the $oldi!!

They have no shame. Many of the above mentioned will continue to stand on the altar every Sunday AXING their congregation to keep dropping those dead presidents.  In doing so, that enables them to continue to support PPP’s with their sexual crimes on the kids.

There is a report on the PPP’s (pedophile perverts priests) carried out over a two-year investigation, described by the judge who supervised the grand jury as addressing allegations of child sexual abuse, failure to report it, endangering the welfare of children and obstruction of justice by people “associated with the Roman Catholic Church, local public officials and community leaders.”

The judge has said the probe involved dozens of witnesses and more than half a million pages of internal church documents.

The investigation pertained to the Allentown, Erie, Greensburg, Harrisburg, Pittsburgh and Scranton dioceses, which together consist of 1.7 million people.

It is about time that the Catholic religion put aside the $oldi aspect of this dilemma and have more concern for the victims. BUTT we know that will never happen.

In my opinion, the candidates for priesthood should be vetted more stringently than they are. If there is the slightest inclination of being a pedophile, they should be immediately disqualified.  We all know that will never happen.  It has always about the $oldi. If they cut the acceptance level by 30%, the religion would go down the tubes.  It has been proven by their lack of deliberate in-actions, they rather keep their status quo, than make a drastic change.

All About the $oldi!!
Wikipedia

Catholic teaching condemns homosexual acts as gravely immoral, while holding that gay people “must be accepted with respect, compassion, and sensitivity,” and “every sign of unjust discrimination in their regard should be avoided.”[1] “The Catholic Church holds that, as a state beyond a person’s choice, being homosexual is not wrong or sinful in itself. But just as it is objectively wrong for unmarried heterosexuals to engage in sex, so too are homosexual acts considered to be wrong.”[2]

It sounds to me that they are trying to CTA and are speaking out of both sides of their mouth.

How much is the Roman Catholic church worth?
Even with all of the pay-out to sexually abused victims, the church is still worth 8 billion dollar$
The Vatican Bank has $8 billion in assets. The Vatican Bank, which has about $8 billion in assets, has often been at the center of scandal and corruption since it was founded in 1942. Pope Benedict began the process of cleaning the bank up, and Francis has continued that work.Sep 24, 2015
How much has the religion paid out to victims to date?

BUTT, always the BUTT, they are still doing what they always did, molesting kids and covering it up.

So how many gay priests actually exist? While there’s a glut of homoerotic writings from priests going back to the Middle Ages, obtaining an accurate count is tough. But most surveys (which, due to the sensitivity of the subject, admittedly suffer from limited samples and other design issues) find between 15 percent and 50 percent of U.S. priests are gay.

Should the church discriminate against the gay applicants by not allowing them to join the priest-hood?? Absolutely.  BUTT we know they won’t.

Aside from the 15 – 50% of the men that are homosexual (big spread in the numbers), there are the true believers that joined the priest hood to spread the word and live by setting good example. BUTT it makes it very difficult to acknowledge the good they are doing when they have the pedophile  anchors hanging over their heads.  Just like good cops and bad cops. The good ones have to suffer because of the bad ones stigma.

I have always been of the opinion; if you want to talk to God, it can be done if you are sitting on the throne or walking in the park.  All religions are is big business, that survive by putting fear in people and shaking them down for the DEAD PRESIDENTS.

So Folks; how do you like the fact that a good portion of your hard-earned $oldi (four billion to be exact), that you are dropping in the basket, is going to pay out settlements for the PPP (perverted pedophile priests)?? Makes you want to work a little harder and longer hours so you can give more, NO??

Charity begins at home. You can’t buy your way past the pearly gates.

To put it in prospective, the closest thing to heaven you will ever encounter, is the next in-the-bone rib eye steak you eat. 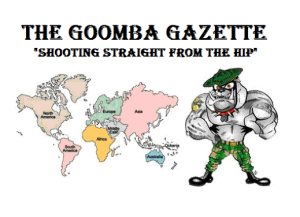 COMMON-SENSE is the name of the game Addressing topics other bloggers shy away from. All posts are original. Objective: impartial commentary on news stories, current events, nationally and internationally news told as they should be; SHOOTING STRAIGHT FROM THE HIP AND TELLING IT LIKE IT IS. No topics are off limits. No party affiliations, no favorites, just a patriotic American trying to make a difference. God Bless America and Semper Fi!
View all posts by The Goomba Gazette →
This entry was posted in $oldi, all about money, Big business, corruption, Crime, Evil, Opinion, Religion, sick people, The world we live in and tagged DEAD PRESIDENTS. Bookmark the permalink.