A waitress with a concealed carry permit defended her co-worker after an irate customer went behind the counter and punched her, newly released video reveals.

The attack at George Webb restaurant in Milwaukee on June 28 could have been much worse, according to Alderman Bob Donovan, who made the footage public.

Isn’t this what a normal customer does when their food takes to long to come or they don’t like how it tastes??? They go into the kitchen and TKO the cook.

That is exactly what this Rastafarian looking dude did when he got pissed off at the service he was getting.  He went into the kitchen and blasted the FEMALE cook. I would have thought a little more of the COWARD if the cook was a man.

After he nailed the cook , her co-worker whipped out her trusty pistol that she had a permit for and stuck it in the COWARDS face.  That put a few stains in the COWARDS skivvies, he quickly had a change of heart and retreated. Great civilized world we live in!!

The cook was ever so grateful her pistol packing friend was there to save her from a severe beating. 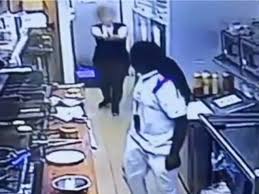 The cops say they know who the COWARD is. He is a local drug dealer. There has been a warrant issued for his arrest.

In my opinion; the only thing wrong with this picture, Anne Oakley didn’t pop a cap in his ass.

To all of the naysayers or anti-gun fools, just think of what the outcome could have been if Anne was not there and PACKING.

I do not advocate that ALL people pack, just the right/qualified/responsible/well trained ones.

COMMON-SENSE is the name of the game Addressing topics other bloggers shy away from. All posts are original. Objective: impartial commentary on news stories, current events, nationally and internationally news told as they should be; SHOOTING STRAIGHT FROM THE HIP AND TELLING IT LIKE IT IS. No topics are off limits. No party affiliations, no favorites, just a patriotic American trying to make a difference. God Bless America and Semper Fi!
View all posts by The Goomba Gazette →
This entry was posted in bad choice, COWARD, Crime, good people, gun control, punk, The world we live in and tagged BANG - you burned my toast. Bookmark the permalink.