GIRAFFE SHIT!! Anyone that kills these defenseless animal for the sport of it is a coward and do it ONLY to boost their ego or stock their trophy cases. 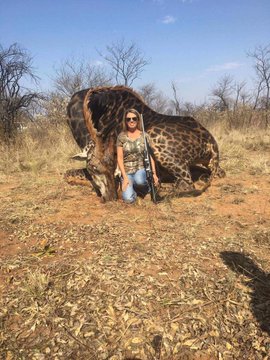 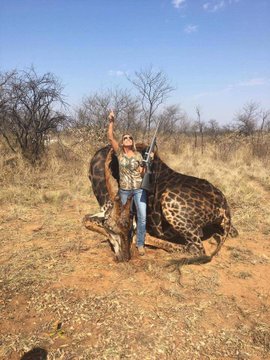 Who does this women think she is Giraffe Shitting? She is killing the animals for the SPORT OF IT.  She like to say that she kills in the name of conservation to keep the bull giraffe from kill the small ones.  Giraffe-shit.  I say, let nature take its course as far as animals eliminating one another. Nature has devised its own method of conversation which been in existence long before the great white hunters came around.

I would view their conquests a little different if the hunters took out the animals with their bare hands. Making it a fair game. Standing a 1/4 mile away with a high-powered rifle is no contest.  Many of the cowards do not even use the animals meat for food. They kill only for the trophy.

100’s of 1,000’s of animals are killed each year; JUST FOR THE PLEASURE OF IT, OR THE FINANCIAL REWARDS, for the sales of its body parts.

The numbers are staggering and a disgrace. For anyone to kill a beautiful animal like a gorilla or a rhino for their body parts, in my opinion, is as bad as someone committing a murder of another human-being. 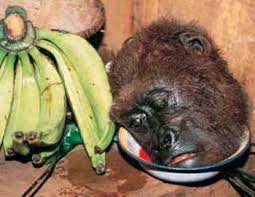 # 1; the respective governments MUST enact laws that protect these animals. # 2, when the laws are in place, the poachers should be brought to trial and dealt with accordingly, not just a fine or a slap on the wrist.

GOVERNMENTS, in many parts of the world are a joke. The head-honchos are worse than the criminals that are illegally hunting the defenseless animals. Many of the politicians are on the take and become very wealthy for allowing  the $laughter, by granting these people licenses and turning their backs on what they kill.

The fact of the matter is FOLKS; corruption is what makes the world go around. It is prevalent in all walks of life and in government.

Not the same, BUTT relevant. We get THE MAN in office that wants to bring the world back to civility and law and order; all he gets for his efforts is get his balls busted by a bunch of

I guess that the occupation of corruption has been around a lot longer than the occupation of politicians.  When the two bombard themselves into one another and co-mingled, that is when the world really started going down the tubes and hasn’t stopped since.

The countries/governments that are the biggest offenders allowing the slaughter of these precious animals must get together and come up with strict guide-lines and severe penalties that are going to get someone attention. BUTT I don’t see that happening. The dollar$ have too much of a strangle hold on corruption

The majority of these slaughters are only for ego, bragging rights and the dollar$.

It is out obligation to at least try to

HELP SAVE THE ANIMALS

COMMON-SENSE is the name of the game Addressing topics other bloggers shy away from. All posts are original. Objective: impartial commentary on news stories, current events, nationally and internationally news told as they should be; SHOOTING STRAIGHT FROM THE HIP AND TELLING IT LIKE IT IS. No topics are off limits. No party affiliations, no favorites, just a patriotic American trying to make a difference. God Bless America and Semper Fi!
View all posts by The Goomba Gazette →
This entry was posted in $oldi, all about money, corruption, Crime, Evil, scum of the earth, the animal kingdom, The world we live in and tagged SAVE THE ANIMALS. Bookmark the permalink.