The naysayers are eating crow….

As distasteful as it is for the Boulder Rollers; only a blind, deaf and dumb, ignorant person can not or does not want to acknowledge PDT’s accomplishments.

You do not have to like the guy or even respect him as a person; just respect the office he represents and the accomplishments he has made.

The most significant one that was not mentioned; the up and coming hook up between PDT and The Kid-Dick-Tator for peace and disarmament talks.

It is such a monumental achievement, there has been some conversation PDT should be given the Nobel Prize.

The Campaign for Donald Trump’s Nobel Peace Prize Has Begun

nymag.com/…/the-campaign-for-donald-trumps-nobel-peace-prize-has-begun.html
2 days ago – Donald Trump convinced North Korea and China he was serious about bringing about change.” “We’re not there yet, but if this happens, President Trump deserves the Nobel Peace Prize,” he said. Some of Trump’s biggest boosters have removed the caveat. They’re ready to give him the Nobel now.

I  will agree. Only a mindless Bolder Roller  would not acknowledge the significance of this mild-stone in history. There are a lot of fools out there!! BUTT; as we can see, some of the naysayers are coming around.

Kanye West on Trump: ‘The mob can’t make me not love him …

https://www.cnn.com/2018/04/25/politics/kanye-west-donald-trump…/index.html
3 days ago – Kanye West remained defiant Wednesday amid mounting backlash from fans over the rapper’s positive words about President Donald Trump, tweeting a picture of himself wearing a “Make America Great Again” hat and criticizing former President Barack Obama.
How does the crow taste folks?? Remember, it is much better without the feathers. 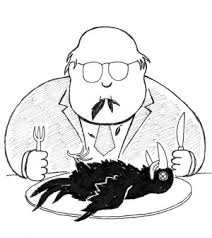 COMMON-SENSE is the name of the game Addressing topics other bloggers shy away from. All posts are original. Objective: impartial commentary on news stories, current events, nationally and internationally news told as they should be; SHOOTING STRAIGHT FROM THE HIP AND TELLING IT LIKE IT IS. No topics are off limits. No party affiliations, no favorites, just a patriotic American trying to make a difference. God Bless America and Semper Fi!
View all posts by The Goomba Gazette →
This entry was posted in amazing people, fools, naysayers, Uncategorized and tagged Agrue with the facts fools. Bookmark the permalink.