If you want it bad enough …

Last month, an unlikely star emerged at the NFL Scouting Combine, and soon he could be joining an NFL team. 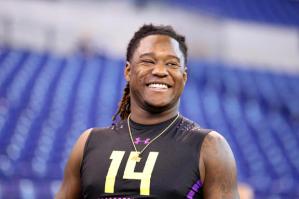 Shaquem Griffin was born with a cognitional defect having only one functional hand to work with. Throughout his life, that LITTLE blemish on his body did not hold him back from doing everything he wanted to do.

According to his twin brother Shaquill, Shaquem has been playing football since he was 4 years old. He can bench press 225 pounds 20 times, and running the fastest 40-yard dash of any linebacker in more than a decade. These attributes and a very positive outlook of NEVER giving up helped to make him a very sought after player in the NFL.

Chances of anyone making it to an NFL team are extremely low for a two handed player let alone someone with one hand.

Making it to an NFL team: About one in 50, or 2.0 percent. — High school senior players eventually drafted by an NFL team: About nine in 10,000, or 0.09 percent. That’s about the chance you have an IQ above 150, as measured by the Stanford-Binet test.

The moral of the Shaquem story is; if you feel sorry for yourself, you probably are the only one that does.

Take the bull by the horns and do the best in life based on what you have.

I am sure he is an inspiration to a lot of people out there that are living with similar conditions.

COMMON-SENSE is the name of the game Addressing topics other bloggers shy away from. All posts are original. Objective: impartial commentary on news stories, current events, nationally and internationally news told as they should be; SHOOTING STRAIGHT FROM THE HIP AND TELLING IT LIKE IT IS. No topics are off limits. No party affiliations, no favorites, just a patriotic American trying to make a difference. God Bless America and Semper Fi!
View all posts by The Goomba Gazette →
This entry was posted in amazing people, People, Power, Sports and tagged Cry you cry alone. Bookmark the permalink.