Lynched themselves in their own words

Once up a time, there were two men that rose from the ashes of the mean streets of The Big Apple and stepped into what some people thought to be the pinnacle of success. They became cops in the NYPD. Their names are Louis Eppolito and Stephen Caracappa. 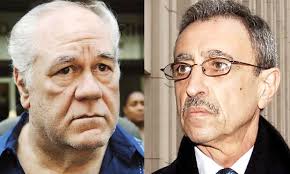 Who could have ever predicted in what direction these two guys would go in their efforts to serve and protect? Or was their motive from the get-go, in becoming a cop, to have a surreptitious motives or visions of grandeur tucked away in their plans??

The story of these two rogue cops from New York City always fascinated me. Not so much because of the crimes they committed, BUTT because of their boldness in the crimes, that started out as small potatoes job for the mob and turned into major offenses.

When they first got their feet wet doing extra-menial tasks for the BOYS, it was nothing more than some other cops did to make an extra buck. That was until the Mafia really got their shit hooks into them, they became greedy and their ego got the best of them.

These two bandits/killers, took a solemn oath to serve and protect the citizens of NY.  Instead; because of their big visions of grandeur,  greed and stupidity; little by little the crimes they committed for the mob became more and more intense/severe.

They went from shaking down and roughing  guys that owed the MAFIA money from loan sharking or lost bets, to eventually becoming full-fledged hit men, committing  murders in cold blood, executed on people who the mob wanted REMOVED.

I don’t see how there could be any worse representation of a cop than these two thugs in detective clothing.  They added a whole new dimension to what a BAD COP truly represents. We can almost say, they thought they had a license to kill.

Louie Eppolito was born in 1948, he was the son of Ralph Eppolito, a member of the Gambino Family.  When the junior Eppolitto applied for the NYPD in 1969, he falsely stated that he was unrelated to organized crime figures. That big black lie let the fox slide under the wire right into the chicken coop. 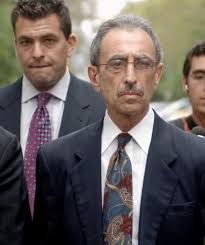 It is very possible if these two men would have never crossed paths/tied up with each-other and became partners, their lives would have taken a completely different direction.  Their story is very interesting in a macabre sort of way.

There seems to be a compulsion or propensity for some people trying to vindicate/validate themselves by writing books because of the what they thought were success in life. Realistically,  their lives turned into gigantic flops.  Their books became their own worst enemies.

Recently Jimmy Boy Comey was one of them that put it all down on paper to try to score a few dollar$. Much of what he wrote was trying to discredit everyone around him to make himself look good. Little did he know that his feeble attempt in medifocically trying assassinating different characters, mostly PDT,  it would backfire on him, eventually showing that the ex-FBI director was nothing but a turn-coat and a traitor.

Hillary Clinton claimed ‘they were never going to let me be president,’ new book says

Recently, in ANOTHER book CHC wrote, she came out with another theory of why she lost the election. That makes a total of 7,258, BUTT who is counting??

Going back to the rouge cops, Louie Eppilito wrote a book after he and Carracappa retired from the force, it is called Mafia Cop. In 1992, Eppolito wrote a book, Mafia Cop: The Story of an Honest Cop Whose Family Was the Mob, in which he spoke of his attempts to avoid being dragged into the criminal life and having to fight for his reputation as a result of the Rosario Gambino corruption case. He moved to Las Vegas around 1994.
The two bad cops thought they got away clean until Louie Eppolito, decided to write a book and become famous. His gigantic ego brought him and his partner in crime down. I can bet that Carracappa was not a happy camper about Louie decision of becoming an author.

In the supposedly fictional book, Louie detailed some of the crimes he and Caracappa pulled off and got away with. That was until the mother of one of their victims Jimmy Hydell they knocked off saw the braggadocios Eppilito on a TV program hustling his wares. All of a sudden she connected Eppolito to her son’s death and dropped a quarter on him.

In the meantime, there was always a lot of suspicion about Eppolito and Carracappa being mobbed up. One of the mob bosses they DID SOME WORK for, Anthony “Gaspipe” Casso was arrested and was going down the tubes. He tried to make a deal with the authorities by singing like a canary to them about the two rogue cops. Because of his notorious background, they did not pursue his accusations.  So much for Omerta, huh fellas!!

2. Every-time CHC opens her mouth or writes another book, she is just demonstrating   her ignorance that is putting her lower and lower in public opinion. Many of her OWN PEOPLE are tired of the SAME OLD SONG.

For the most part, many of these so-called celebs really don’t WRITE A BOOK themselves; they dictate whatever they are trying to convey to a ghostwriter and pays them to hammer it out.  It takes a lot of skill and time to write a book, and the majority of them have neither.

A word to the wise who are living on the edge and want to become famous. As the old story goes; it is best to leave somethings unsaid – silence is golden – loose lips sink ships – and so on!!

COMMON-SENSE is the name of the game Addressing topics other bloggers shy away from. All posts are original. Objective: impartial commentary on news stories, current events, nationally and internationally news told as they should be; SHOOTING STRAIGHT FROM THE HIP AND TELLING IT LIKE IT IS. No topics are off limits. No party affiliations, no favorites, just a patriotic American trying to make a difference. God Bless America and Semper Fi!
View all posts by The Goomba Gazette →
This entry was posted in $oldi, absolute nonsense, all about money, arrogance, bad choice, Celebs, ego, fools, Opinion, The world we live in and tagged Not a smart move. Bookmark the permalink.

1 Response to Lynched themselves in their own words