Don King, the most famous and successful boxing promoter, tells FOX Business that President Donald Trump “shocked the world” when he won the presidency and has exceeded expectations as the leader of the free world.

“No one has carried the type of lightening rod activities since the 13 colonies wrote a letter to King George saying they wanted to discharge so they can be eliminated and independent Americans,” King said.

Ironically, Donald King is 100% correct. King may be a lot of different things; BUTT he is no fool. PDT has shocked the world and will continue to do so.

PDT and Donald King seem to be strange bed fellows. Both are very rich, both outspoken individuals, both famous, BUTT, both they come from the different side of the track.  We all know where PDT comes from.

King was born in Cleveland, Ohio, where he attended school and graduated from John Adams High in 1951.[4] After dropping out of Kent State University, he ran an illegal bookmaking operation out of the basement of a record store on Kinsman Road, and was charged with killing two men in incidents 13 years apart. The first was determined to be justifiable homicide after it was found that King shot Hillary Brown in the back and killed him while he was attempting to rob one of King’s gambling houses in 1954.[1] In 1967, King was convicted of second degree murder for the second killing after he was found guilty of stomping to death an employee, Sam Garrett, who owed him $600.[1]

Along with some of his other activities and accomplishments, some through nefarious dealings; King has risen to the highest paid, most well known boxing prompter in boxing history.

Depending on who one talks to, many have nothing praise for the man and others like Mike Tyson who King took over the coals, have nothing but disdain for the spiked haired celeb.

This is what Tyson said about the man.

Mike Tyson, the former undisputed World Heavyweight Boxing Champion, says of his former manager, “(King is) a wretched, slimy, reptilian motherfucker. This is supposed to be my ‘black brother’, right? He’s just a bad man, a real bad man. He would kill his own mother for a dollar. He’s ruthless, he’s deplorable, he’s greedy … and he doesn’t know how to love anybody.”[21]

King has been investigated for possible connections with organized crime. During a 1992 Senate investigation, King invoked the Fifth Amendment when questioned about his connection to mobster John Gotti.[20]

Lawsuits and prosecutions King was involved in:

King has been involved in many litigation cases with boxers that were focused on fraud. In 1982 he was sued by Muhammad Ali for underpaying him $1.1 million for a fight with Larry Holmes. King called in an old friend of Ali, Jeremiah Shabazz, and handed him a suitcase containing $50,000 in cash and a letter ending Ali’s lawsuit against King. He asked Shabazz to visit Ali (who was in the hospital due to his failing health) and get him to sign the letter and then give Ali the $50,000. Ali signed. The letter even gave King the right to promote any future Ali fights. According to Shabazz, “Ali was ailing by then and mumbling a lot. I guess he needed the money.” Shabazz later regretted helping King. Ali’s lawyer cried when he learned that Ali had ended the lawsuit without telling him.[22]

Larry Holmes has alleged that over the course of his career King cheated him out of $10 million in fight purses, including claiming 25% of his purses as a hidden manager. Holmes says he received only $150,000 of a contracted $500,000 for his fight with Ken Norton, and $50,000 of $200,000 for facing Earnie Shavers, and claims King cut his purses for bouts with Muhammad Ali, Randall “Tex” Cobb, and Leon Spinks, underpaying him $2 million, $700,000, and $250,000, respectively. Holmes sued King over the accounting and auditing for the Gerry Cooney fight, charging that he was underpaid by $2 to $3 million.[23] Holmes sued King after King deducted a $300,000 ‘finder’s fee’ from his fight purse against Mike Tyson; Holmes settled for $150,000 and also signed a legal agreement pledging not to give any more negative information about King to reporters.[24]

Tim Witherspoon was threatened with being blackballed if he did not sign exclusive contracts with King and his stepson Carl. Not permitted to have his own lawyer present, he signed four “contracts of servitude” (according to Jack Newfield). One was an exclusive promotional contract with Don King, two were managerial contracts with Carl King, identical except one was “for show” that gave Carl King 33% of Witherspoon’s purses and the other gave King a 50% share, more than is allowed by many boxing commissions. The fourth contract was completely blank.[25]

Other examples include Witherspoon being promised $150,000 for his fight with Larry Holmes, but receiving only $52,750. King’s son Carl took 50% of Witherspoon’s purse, illegal under Nevada rules, and the WBC sanctioning fee was also deducted from his purse.[26] He was forced to train at King’s own training camp at Orwell, Ohio, instead of Ali’s Deer Lake camp which Ali allowed Witherspoon to use for free. For his fight with Greg Page he received a net amount of $44,460 from his guaranteed purse of $250,000. King had deducted money for training expenses, sparring partners, fight and airplane tickets for his friends and family. Witherspoon was never paid a stipulated $100,000 for his training expenses and instead was billed $150 a day for using King’s training camp. Carl King again received 50% of his purse, despite Don King Promotions falsely claiming he had only been paid 33%.[27] HBO paid King $1,700,000 for Witherspoon to fight Frank Bruno. Witherspoon got a purse of $500,000, but received only $90,000 after King’s deductions. Carl King received $275,000.[28] In 1987 Witherspoon sued King for $25 million in damages. He eventually settled for $1 million out of court.[29]

Mike Tyson sued King for $100 million, alleging the boxing promoter cheated him out of millions over more than a decade.[30] It was settled out of court for $14 million.[31]

In 1996 Terry Norris sued King, alleging that King had stolen money from him and conspired with his manager to underpay him for fights. The case went to trial, but King settled out of court for $7.5 million in 2003. King also acceded to Norris’ demand that the settlement be made public.[32][33] 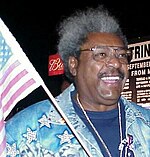 In 2005 King launched a $2.5 billion defamation suit against ESPN, the makers of SportsCentury, after a documentary alleged that King had “killed, not once, but twice”, threatened to break Larry Holmes‘ legs, cheated Meldrick Taylor out of $1 million, and then threatened to have Taylor killed. Though the documentary repeated many claims already made, King said he had now had enough. King’s attorney said “It was slanted to show Don in the worst way. It was one-sided from day one, Don is a strong man, but he has been hurt by this.”[34]

The case was dismissed on summary judgment with a finding that King could not show “actual malice” from the defendants. Judge Dorian Damoorgian ruled, “Nothing in the record shows that ESPN purposefully made false statements about King in order to bolster the theme of the program or to inflict harm on King.”[35]

In May 2003, King was sued by Lennox Lewis, who wanted $385 million from the promoter, claiming King used threats to pull Tyson away from a rematch with Lewis.[36]

In early 2006, Chris Byrd sued Don King for breach of contract and the two eventually settled out of court under the condition that Byrd would be released from his contract with King.[37]

The secret to a successful life is to be versatile, at the same time cautious, both in our personal and private lives. It take a lot of different personalities/characters to make the world go around. If a person is streetwise and careful, they can make lemonade out of lemons.

Some people look at a possible relationship between PDT and the Judo Guy as taboo.  An old say from a person very dear to me was; I will break bread with them, BUT I will not sleep with them.

In our lives there are various relationship that need to be developed in order to make progress. It is not necessary to like the person in order to deal with them. Just because we may be dealing with someone of a questionable background, it doesn’t mean that we are part of the same circle.

SOOOOOOOO; for PDT to have a relationship with Putin or Donald King, that does not mean he is (figuratively) sleeping with them. Diversity is what makes the world go around.

I would suggest, the compliment from King to PDT is a positive; BUTT ……

COMMON-SENSE is the name of the game Addressing topics other bloggers shy away from. All posts are original. Objective: impartial commentary on news stories, current events, nationally and internationally news told as they should be; SHOOTING STRAIGHT FROM THE HIP AND TELLING IT LIKE IT IS. No topics are off limits. No party affiliations, no favorites, just a patriotic American trying to make a difference. God Bless America and Semper Fi!
View all posts by The Goomba Gazette →
This entry was posted in Celebs, Opinion, Trumpness and tagged The King of promoting. Bookmark the permalink.