Birds of a feather

Many old saying come to mind when I look at this picture; One being, we can ALWAYS tell the character of a person by the company they keep. 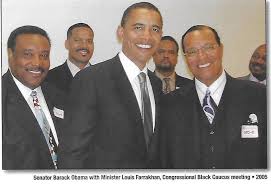 Photojournalist Askia Muhammad released a photo this week showing former President Barack Obama and the controversial Nation of Islam leader Louis Farrakhan from Obama’s years as a state senator — and the photographer revealed Thursday that the Congressional Black Caucus had pressured him for more than a decade to keep it hidden.

Muhammad told the Trice Edney News Wire last week that he believed that the image “absolutely would have made a difference” in the 2008 presidential campaign had it been made public.

The image taken in 2005 at a Congressional Black Caucus meeting on Capitol Hill showed then-Senator Obama, a young Democrat from Illinois, smiling side-by-side with Farrakhan.

Muhammad told Fox News’ Tucker Carlson that the same day he snapped the photo, the CBC contacted him.

“A staff member from the black caucus called me and said ‘we have to have the picture back,’ and I was kind of taken aback. And we talked a couple of times on the phone after that, and I said ‘Okay, I will give the picture back to Minister Farrakhan’s chief of staff,’” he said on “Tucker Carlson Tonight.”

It should not be a big secret to anyone that Mr. O leaned more toward the black community while in office. The problem was, he didn’t lean hard enough to suit them all.

Many people in the black community say condition regressed while he was in office instead of progressing. Mr. O was for Mr. O and that is a fact.  He was going to try and give the black community a lot more then he did the white, BUTT he would never jeopardize his own position.

Many of the things he did that showing favoritism to the blacks were done clandestinely or he had someone like his mouth-piece like Holder, who admitted as much, do his talking for him.  Eric Holder says things ‘Obama can’t say at times’.

Later in his presidency, when  he knew he was untouchable, he became a little more on the bold side by inviting people like Albert Sharpless and associates to the Casa Bianca.

Talk about the 3 Musketeers. I sure would have liked to be a fly on the wall in some of their meetings.

Let us be realistic. Obama was in a very unique position by being the first multi-racial president in the USA.  HIS PEOPLE and many of the white sympathizers elected him, 1st because he is half black and then because of his liberal mentality in the way of governing.

It has been proven time after time, ultra-liberal governing does not work. All we have to do is take a look at the nation debt when Obama was elected and see what it was when he got his hat. There does not need to be any additional proof.

A very big concept of the liberal way of governing is; a gigantic giveaway. They take the easy road and reward the citizens for their bad behavior by throwing billions of dollar$ at them without trying to get to the core of the problem.

It takes a good, strong, independent thinker to come up with solutions to problems and work them out without throwing good money after bad.

Can we put 100% of the blame on any president for the condition this country is in?  Absolutely not, BUTT we can hang the blame on the ones that were most responsible for our present conditions. Obama is getting an A+ on that report card.

SOOOOO, what does he do to immortalize his time in office; build a library to the tune of 1.5 billion dollar$.

I can’t help BUTT wonder; is he going to have a specially designated wall showing the graph of how the national debt increased while he was sitting in the Big Chair?? ORRR some of the other blunders he made that will haunt the world for years to come??

Much of what Obama did was ego driven and this behemoth of a library is just the icing on the top of his other blunders.

We all know that EVERY president is going to make mistakes along the way; BUTT not of that magnitude, just to satisfy his aspirations.

The article left out the most egregious mistake he made; the Iranian deal. This one-sided whore deal’s ugly head have not yet surfaced.

SOOOOOOOO, was it a good idea to leave out Louie from the family photo? Probably so. BUTT, it is a sad day when a person is ashamed of the brothers and do not want to be associated with them.

More words related to birds of a feather

Once a friend; always a friend!! NOT!!

Louie has less than a stellar reputation, depending on who you ask.

Louie please use the back door when visiting.

Talk about rewarding loyalty. Let us not forget what the Obama’s did to Oprah after she backed them 1,000%. They kicked her to the curb.  Without her support, Mr. O would have never put his hand ion the bible, or was it the Koran??

As the old saying goes; it is not what you did for me yesterday, what can you do for me tomorrow!! That saying seem very apropos in many of our day to day relationships.

Amen to that Brothers and Sisters!!

“A staff member from the black caucus called me and said ‘we have to have the picture back,’ and I was kind of taken aback. And we talked a couple of times on the phone after that, and I said ‘Okay, I will give the picture back to Minister Farrakhan’s chief of staff,’” he said on “Tucker Carlson Tonight.”

He added that after he gave the original copy to Farrakhan’s staff, he kept his own copy but remained quiet.

“I gave the original disk to him and in a sense swore myself to secrecy because I had quietly made a copy for myself,” Muhammad said. “It’s my picture, it’s my art, and it’s my intellectual property. I owned it and I wanted to keep it.”

He said the CBC called him  while he was still on Capitol Hill and he believed that it was because “they sensed the future.”

“Minister Farrakhan and his reputation would hurt someone trying to win acceptance in the broad cross-section,” he said, referring to the possibility at the time that the young senator was being considered for a presidential run.

Muhammad also said that Obama had, at some point, people from the Nation of Islam working on his staff and in his offices.

The Congressional Black Caucus did not immediately reply to Fox News’ request for a comment.

COMMON-SENSE is the name of the game Addressing topics other bloggers shy away from. All posts are original. Objective: impartial commentary on news stories, current events, nationally and internationally news told as they should be; SHOOTING STRAIGHT FROM THE HIP AND TELLING IT LIKE IT IS. No topics are off limits. No party affiliations, no favorites, just a patriotic American trying to make a difference. God Bless America and Semper Fi!
View all posts by The Goomba Gazette →
This entry was posted in Birds of a feather, Obamaness, The world we live in and tagged Never turn your bacl on a friend. Bookmark the permalink.