Words to the wise or words from the wise …

Four star Marine Corps general Neller is one of the old Corps and can read the handwriting is on the wall.  These are very precarious times for the entire world but there are some fools who live under a rock do not want to recognize it.  We are ALL sitting on a powder keg and it will not take too much to ignite it.

Russia on one side – China on the other – Iran in between and North Korea leading the parade of madmen. Which one of these countries can the USA trust? I would say none of them.

There has been an obsession since the beginning of time for countries and their leaders to want to dominate the world.  They are all warmongering pigs.  There is plenty to go around for everyone but some of the pigs want it all.

A little off the subject, BUT a comparison. Is Amazon satisfied with their successes? Hell no. They want to control everything.  How many people did they and companies like Walmart put out of business? The small mom and pop establishments that worked very hard over the years to make ends meet, only to have the corporate giants come in a squash them. They want it all.

To my way of thinking; when anything has such an adverse affect on so many, just to enrich a very few; to me that should not be consider an accomplishment.

If  all countries and world leaders concerned put their heads together and studied the avenue toward peace on earth, it is very possible to achieve that goal.  In my opinion, the mindset of  these unscrupulous, power hungry pigs, they absolutely do not want peace.

This kind of mentality coming from many of the rich and powerful to keep their coffers full is an obsession to them and will they will go to any extreme to achieve their goals.  I call it blood money.

Washington (CNN)Former President George W. Bush is under fire for charging $100,000 to speak to a group of veterans wounded in a pair of wars he started when he was in office, just the latest front in a political battle over speaking fees that has hit both sides of the aisle.

Members of the Texas-based Helping a Hero charity told ABC News that Bush charged $100,000 for his 2012 speech at a charity fundraiser for veterans who lost limbs in the Afghanistan and Iraq Wars. The former president was also given use of a private jet at a cost of $20,000 and former First Lady Laura Bush was paid $50,000 to speak to the group last year.

How many people was GWB responsible for getting killed, crippled for life and disabled when he and his henchman Cheney illegally invaded Iraq and started this vicious cycle we are in today?

Yet he was invited to speak at a Vets event (I don’t know why) and he charged them 100,000 dollar$. That was not bad enough, he demanded a private jet to take him home and back to the tune of another 20 G’s. The guy is all heart.  If that is not piggery, I don’t know what is.  This is just a small example of wanting it all.

On top of that ; Mrs. Bush got her piece.

The majority of the conditions the world is in today are a snowballing affect of what those two men and their behind the scenes profiteers started.

Is this kind of mentality pathetic or what?  I am positive there are numerous other ways of generating money to keep our economy strong other then staring wars. But the people that control the country and it’s pure string have the means and conniving to divert the attention away from themselves.  They all come on so pious and devout.

Take a look back at some of the most despicable people/companies that profit by wars.

The business of war is profitable. In 2011, the 100 largest contractors sold $410 billion in arms and military services. Just 10 of those companies sold over $208 billion. Based on a list of the top 100 arms-producing and military services companies in 2011 compiled by the Stockholm International Peace Research Institute (SIPRI), 24/7 Wall St. reviewed the 10 companies with the most military sales worldwide.

The fact that Bush is keen on war has little or nothing to do with his psyche, but a great deal with the American economic system. This system – America’s brand of capitalism – functions first and foremost to make extremely rich Americans like the Bush “money dynasty” even richer. Without warm or cold wars, however, this system can no longer produce the expected result in the form of the ever-higher profits the moneyed and powerful of America consider as their birthright.

Based on the aftermath of the disasters wars bring; how can these heartless bastards even look in the mirror when they shave?  Money and power have been such a controlling factors in their lives; in their feeble minds, they have talked themselves into believing they are providing a service for their country by starting wars.

Although we would like to believe that the USA is Lilly white and clean as the new fallen snow; that is absolutely WRONG.  FOLKS it is a shame to say; it is all about dollar$.

Peace is very doable if everyone pulled in the same direction. Not only in the warring aspects but in civil matters as well.  There are pathetic elements that keep the racial fire burning – groups that purposely promote terrorism and the warmongers that are getting fatter and fatter with each war we get into.

Like General Neller; I certainly hope for the sake of mankind that he is wrong. BUT, if I were a betting man, I would not want to wager on this one. It can go either way very easily.

In North Korea’s situation; if The Kid’s back is against he wall, he will definitely hit the red button. In his feeble mind, he has everything to gain and nothing to lose.

This is why we must all support PDT in his attempts to keep the country safe. From every indication or vibe I get from him; I believe he is one of the better ones to sit in the Big Chair in a very long time.  A little rough around the edges but a true patriot. 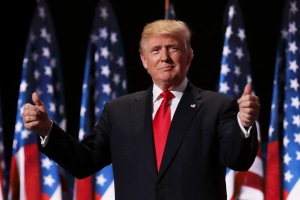 COMMON-SENSE is the name of the game Addressing topics other bloggers shy away from. All posts are original. Objective: impartial commentary on news stories, current events, nationally and internationally news told as they should be; SHOOTING STRAIGHT FROM THE HIP AND TELLING IT LIKE IT IS. No topics are off limits. No party affiliations, no favorites, just a patriotic American trying to make a difference. God Bless America and Semper Fi!
View all posts by The Goomba Gazette →
This entry was posted in America's finest, dangerous territory, insanity, War and tagged NEVER SAY NEVER. Bookmark the permalink.