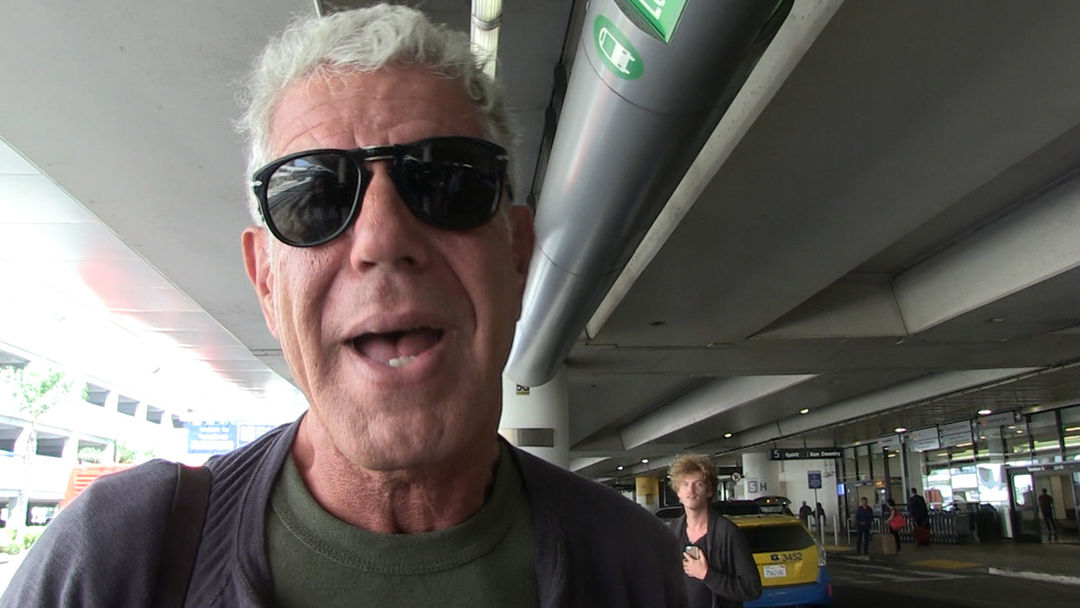 It is almost comical what a little celebrity, a microphone and a camera will do for someone to come out of their shell. SOOOOO; I have to conclude that you CAN put lipstick on a hog.

This is not the first time we heard the x-chef, world traveling drunk run his mouth about offing the PDT. The Kid–dick-tator, he has my vote.
With a history as this admittedly former druggy and high-priced bum has; he has no business criticizing or threatening to kill anyone let alone the President of the USA. The Kid–dick-tator, he has my vote.
SOME FOOD FOR THOUGHT …
TMZ.com

Anthony Bourdain would dish poison if Donald Trump and Kim Jong-un made reservations for 2.

Also, doesn’t sound like he’s got a soft spot for Kim Jong-un, who he calls a “chubby, evil little f***.”

As the electric-shocked haired Dude from Cleveland would say; ONLY IN AMERICA, could a bum like Bourdain be successful.

Truthfully, I used to like the chef. He is a high-priced stumble-bum, but admits it. When I USED TO watch his program, I got a kick out of how a person that was so f#*ed up got paid so much to travel the world.  It takes real natural talent to be that successful with such a limited personality; that is unless he had a GOD-FATHER somewhere in high places watching over him.

I DID admire his straight forward conversation and his sense of humor; BUT his belligerence against the President of the USA is something to be desired. What the hell did PDT ever do to this dude?? He is just another sheep in the parade of them jumping off the cliff.

Whether fools like Bourdain know it or not, it is against the law to threaten the president. I think PDT should put the hammer down on one of these jokers and make an example out of them.

OK; you don’t like someone. That is OK, I probably didn’t like you first. There are more people I dislike than people I do like. If I killed everyone that disagreed with me or I disagreed with; probably 85% or more of the people I met in my life would be in Boot Hill.

It is perfectly OK to dislike anyone we chose. As a matter of fact; I coined a phrase a few years back; IF EVERYONE LIKES YOU, YOU ARE DOING SOMETHING WRONG!!

There are some fools in this world that it would be an insult to me if they liked me.  No one is compelled to like anyone. BUT; to say you are going to kill them is an entirely different story.

At this time, out of the 1,ooo’s of people I know, there are only two son-of-a-bitches, maybe three that are on my hit list.  If I ever put their lights out, I would sit down, eat a big capicola sandwich and then kick them in the face while they were in the prostrated position. BUT; I am not a fool like Bourdain and some of the other comedians out there that name names. When I drop the bomb, it definitely will be a Pearl Harbor.

Aside from that little minute,  tid-bit of information; it is not so much the person but the office PDT represents that is disrespected which bothers me the most.

Where I come from; a person never pulls out a gun unless they intend to use it. The threats from the Ship of Fools, is just as irresponsible as the act itself!!

The black population, of all people, are the 1st ones that talk about being disrespected. Respect is earned not given. If and when they get their house in order, I will be the 1st one in line demonstrating with them.  No crime, no need for police intervention.

The same goes for law-enforcement, they desperately need to get their house in order and rid itself of all the cowboys on the forces.  These rogue cops are poison to society

I know 100’s of black people that are all good, stand-up, hard working, solid citizens of this country. I respect many of them more than I do some honkies. BUT; just like in any other scenario; a few bad apples spoil the whole barrel. That applies to all races, religions and nationalities.

The black communities, with the assistance from the government at all levels, must join forces and get to the root of the problem.

In one way or another, all of the social problems we have in this country are linked together.  Iniziare a risparmiare i penny ei dollari verranno, Start saving the pennies and the dollars will come (Old Italian saying). Read between the pennies.

CUT OFF THE HEAD OF THE SNAKE

Meteorically speaking; The systems have been letting the prisoners run their prison. The tail is wagging the dog, instead of the dog wagging the tail

One inch – one foot – one yard – one miles and the ball game is over.  The players are way past the 5th miles so far. The permissive, spineless, greedy, un-American owners of the NFL, that put $oldi before the country, the country that allowed them all to become billionaires, have let their players dictate to them for so long, they have lost control.  So that cliche is correct, the prisoners are running the prison.

I have been standing on a soap box, screaming my ass off and pulling out the little hair I have left; expounding on the root of the problem; the out of control criminal activities of the black community.  No one wants to address that issue; why, because most people are cowards, it is too sensitive and people are hypocrites.

The real root of the problems

1. Data shows that 93 percent of black homicide victims are killed by other blacks.

The left’s rebuttal is that that 84 percent of white homicide victims are killed by other whites, but The Wall Street Journal‘s Jason Riley points out that the white crime rate is “much lower than the black rate.”

2. According to Riley, “Blacks commit violent crimes at 7 to 10 times the rate that whites do.”

Here are some more statistics from the FBI:

What about violent crime more generally? FBI arrest rates are one way into this. Over the last three years of data – 2011 to 2013 – 38.5 per cent of people arrested for murder, manslaughter, rape, robbery, and aggravated assault were black.

3. Black crime is even more prevalent in the country’s largest cities and counties.

By contrast, only 258 blacks were killed by police gunfire that year.

5. The percentage of blacks arrested for crimes is consistent with police reports.

This is according to the National Crime Victimization Survey, as well as this 1985 study:

“Even allowing for the existence of discrimination in the criminal justice system, the higher rates of crime among black Americans cannot be denied,” wrote James Q. Wilson and Richard Herrnstein in their classic 1985 study, “Crime and Human Nature.” “Every study of crime using official data shows blacks to be overrepresented among persons arrested, convicted, and imprisoned for street crimes.” This was true decades before the authors put it to paper, and it remains the case decades later.

This data disproves the notion that racism is what drives higher rates of arrests among the blacks than among whites or broader America.

6. According to Riley, “Black crime rates were lower in the 1940s and 1950s, when black poverty was higher” and “racial discrimination was rampant and legal.”

If it’s not racism and poverty that are blame for the high black crime rate, then what is?

7. According to Mac Donald, “A straight line can be drawn between family breakdown and youth violence.”

All of these statistics have been substantiated, they are not contrived.

I never claimed to be the sharpest knife n the drawer but I do have a good amount of common-sense and street sense.  The old saying is; if you cut off the head of the snake, the rest will die.  In this case, the head of the snake in the black community is it’s out-of- control crime and violence. If that can be brought under control, or cut off, the rest of the snake will die. Their problems would be solved. No crime, no interaction with the out of control rouge cops, who should not be on the force to start with.

Camouflaging the root of a problem, shoving under the bed where it can’t be seen or pretending it does not exist by blaming it on something else to avert the attention away,  is TOTALLY counter-productive. If a situation, not matter how big or small is not addressed to the core of the condition, it’s true complexities can’t eve be addressed.

MAN up BOYS – with all of the kneeling you been doing, you are only BOYING up. You want to be treated like a man; then act like one.  Address the true root of the problem.

CUT OFF THE HEAD OF THE SNAKE