Back to the grind stone Folks

Good morning all you Gazetters.  We all hit the sack last night with the anticipation we would wake up a winner. These days, just waking up makes us winners. As far as the BIG ONE goes, there was only one lucky stiff in Massachusetts that hit the 752 million dollar Powerball jackpot. It was the biggest jackpot hit by one person in the history of Powerball.

As for the rest of us hopefuls, it is back to the grind stone and waiting for the next BIG ONE to come along.  Better luck next time. 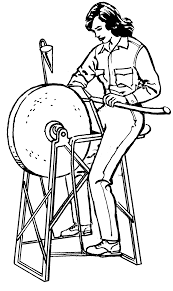 To the winner. If you are a Goomba Gazette follower and played because of my encouragement; don’t forget who sent you.

By his rhetoric, it looks like PDT is becoming  more and more like a politician with his threats. It doesn’t appear that he has the strength he thought he did. He keeps getting shot down at every corner.  Hopefully, someday the country will come together and accomplish something instead of wasting precious time and calling each-other; &%^#@(&%$#@.

It looks like Ryen August Russillo, ESPN TV host had too much fire-water. He was caught walking around in his neighbor hood coom-a-see-gama hanging out.
https://www.cbsnews.com/news/federal-judge-throws-out-texas-voter-id-law/
What the hell does this fool of a judge have between his ears. Obviously not much!! There absolutely should be a means of identification supplied by all voters.
http://www.huffingtonpost.com/entry/colin-kaepernick-police-killings-black-americans_us_599c4099e4b04c532f447939?ncid=inblnkushpmg00000009
I will be the first to acknowledge that there are way too many instances of black people being killed by the cops. My question is; what is the crime ratio between white and blacks?? My answer is; Blacks make up approximately 13% of the US population while they commit 52% of crime. In 2014 according to the FBI, 90% of black homicide victims were killed by other black people.
I don’t know if it is just me. I have always been of the opinion; if we do not put ourselves into a criminal situation, that is 9/10’s of the battle. Don’t go where you don’t belong and don’t do what you should do. It is pretty simple.
On the other side of the coin; I blame the government for not initiating programs to get potential criminals off the streets. The impoverished neighborhoods in this country are a disgrace. There is virtually no where for these people to go.
Employment may not be the complete answer but I will say, it would certainly put a gigantic dent on the crime rate. If only half of all the thugs out there did want to accept a government job, that would be a tremendous start. Possibly it would become infectious.
With all of the bulls-shit being slung back and froth between PDT and the Boulder Rollers; if that kind of effort was put into getting people off the streets, we could cut down tremendously on the crime rate, keep our streets clean, cut back dramatically on police brutality, keep our prison population down and start making our citizens responsible citizens. Anyone one see a down-side to a plan like that??  If you do, you are a fool!!
AS THE WORLD TURNS

COMMON-SENSE is the name of the game Addressing topics other bloggers shy away from. All posts are original. Objective: impartial commentary on news stories, current events, nationally and internationally news told as they should be; SHOOTING STRAIGHT FROM THE HIP AND TELLING IT LIKE IT IS. No topics are off limits. No party affiliations, no favorites, just a patriotic American trying to make a difference. God Bless America and Semper Fi!
View all posts by The Goomba Gazette →
This entry was posted in $oldi, anti-American, Anti-Trump, Celebs, classless people, Crime, foolish people, Greed, immigration, injustice, PC insanity, The world we live in, THUGS, Trumpness, wake up America and tagged The future is in our hands ...... Bookmark the permalink.