I find it very unusual that Oprah is interviewing Mrs. O and they seem to be on friendly terms. 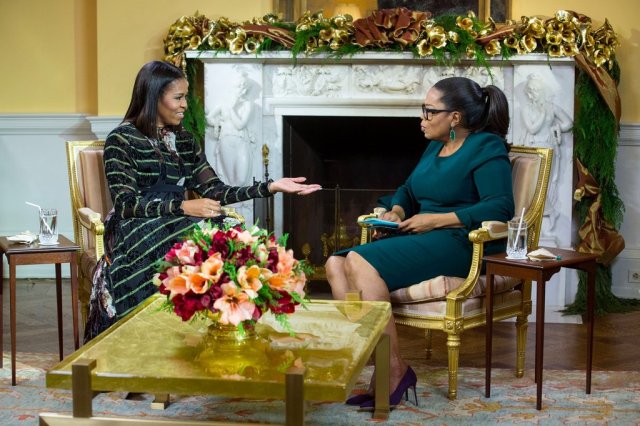 I said many times; Barrack Obama owes the victory of his 1st election to – Oprah – GWB and Cheney. The  GWB and Cheney scenario is pretty simple. The American people could not take 4 more years of republican rule.

As far as Oprah is concerned; she went all out, pulled out all the stops to back Obama because he was the 1st black man to run for The Big Chair and she wanted to support him. Understandably so.

The clincher in the deal was; after the votes were counted and Obama was elected, he and the Mrs. threw Oprah under the bus.

The consensus of opinions was that Mrs. O felt threatened by Oprah and her relationship with her hubby.  Now they are like best friends with Oprah interviewing Mrs. O for her going away party.  Oprah must be a very forgiving person.

The old saying; keep your enemies close but your friends’ closer, does truly fit this situation.

I think that Mrs. O is doing this country a big disservice by all of the negative comments about DT being in the Casa Bianca.  She and here better half should be supporting the New Guy and be more optimistic with their comments or say nothing at all.  Whether they will admit it or not; it is all about sour grapes. Cut and dry.

COMMON-SENSE is the name of the game Addressing topics other bloggers shy away from. All posts are original. Objective: impartial commentary on news stories, current events, nationally and internationally news told as they should be; SHOOTING STRAIGHT FROM THE HIP AND TELLING IT LIKE IT IS. No topics are off limits. No party affiliations, no favorites, just a patriotic American trying to make a difference. God Bless America and Semper Fi!
View all posts by The Goomba Gazette →
This entry was posted in wolf tickets and tagged Strange relationship. Bookmark the permalink.

2 Responses to Change of heart??