WASHINGTON –  French and Kurdish forces in northern Iraq were attacked by an exploding drone, the Pentagon said Wednesday, adding a new worry to the wars in Iraq and Syria as militant groups learn to weaponize their store-bought drones.

Anyone with a half of a brain has to know that sooner or later; the  little fun loving machines that were developed for harmless entertainment purposes would be used for nefarious reasons.

I have done at least a half a dozen posts on the dangers of drones. As usual, no one is listening.

As far as I am concerned, these potential aerial assassins should be banned all over the world except for police and military uses.  What would it take for the terrorists to start using them in this country??? Not too much.

Par for the course. Our political leaders always wait until there is a catastrophe or one of their own are involved before they make a move. They continue to do what they do best:

It has been proven around the world that drones are definitely a safety hazard.

I would have thought that the Japanese were a little smarter than they are and banned the flying machines after a drone carrying radioactive material landed on their prime minister’s roof.

IF – Always the Big IF; the boys with toys need to get their jollies off flying the pesky machine, there should be specially  designated areas for them to be flown in like the guys have with model airplanes.  To make things a little more interesting, they could have a make believe aerial battles  with the drones fighting the model planes.  Sounds like fun.

If and when that is accomplished (I do not ever expect it will), it should be open season to shoot any drone out of the sky anywhere but the areas designated.

So once again my question is; what is more important, the safety of the people in this world or the almighty $$$$$.  We all know the answer.

I say get the shotguns out and start blowing those little puppies out of the sky. You never know which one will have a surprise package in it for you. 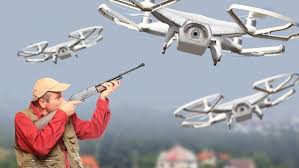 For the people out there that need IT in 30 minutes or less as Amazon is advertising; get your lazy ass off the couch or recliner and shoot over to KMart.  The exercise probably will do you some good.

COMMON-SENSE is the name of the game Addressing topics other bloggers shy away from. All posts are original. Objective: impartial commentary on news stories, current events, nationally and internationally news told as they should be; SHOOTING STRAIGHT FROM THE HIP AND TELLING IT LIKE IT IS. No topics are off limits. No party affiliations, no favorites, just a patriotic American trying to make a difference. God Bless America and Semper Fi!
View all posts by The Goomba Gazette →
This entry was posted in Opinion, The world we live in, wake up America and tagged Lock & load. Bookmark the permalink.

1 Response to What took them so long????