Shaw fumbled in the end zone

And the top bullshitting award of the year goes to: 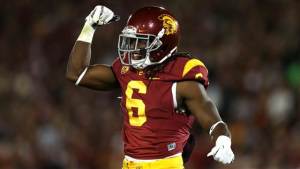 Josh Shaw USC senior football standout has admitted he lied about his nephew drowning in a pool  and injuring his ankle while jumping off of a 2nd floor balcony in an effort to save the youngster.

This guy either craves a lot of attention, wanted to impress some of his many female followers, has a confidence problem or is a few boards short in his attic. Can be all of the above.

Eventually Shaw fumbled in the end zone and his deceit was exposed. Trying to save face the grid-iron star had to come clean and admit to his fabrication.

“We are extremely disappointed in Josh,” USC head football coach Steve Sarkisian said in the statement. “He let us all down. As I have said, nothing in his background led us to doubt him when he told us of his injuries, nor did anything after our initial vetting of his story.”

“I appreciate that Josh has now admitted that he lied and has apologized. Although this type of behavior is out of character for Josh, it is unacceptable. Honesty and integrity must be at the center of our program. I believe Josh will learn from this. I hope that he will not be defined by this incident, and that the Trojan Family will accept his apology and support him.”

What other choice did Shaw have but to admit he was lying?  When your hand is in the cookie jar it is hard to deny it.

Shaw has been suspended indefinitely from all team activities as he should be.

In a statement to the press Shaw said; “On Saturday, August 23, 2014, I injured myself in a fall. I made up a story about this fall that was untrue. I was wrong to not tell the truth. I apologize to USC for this action on my part.”

“My USC coaches, the USC Athletic Department, and especially coach Sarkisian have all been supportive of me during my college career and for that, I am very grateful.”

I always have maintained; “if you are going to be a bull-shitter you better be a good one.”

It seems that the college kid failed that test.

COMMON-SENSE is the name of the game Addressing topics other bloggers shy away from. All posts are original. Objective: impartial commentary on news stories, current events, nationally and internationally news told as they should be; SHOOTING STRAIGHT FROM THE HIP AND TELLING IT LIKE IT IS. No topics are off limits. No party affiliations, no favorites, just a patriotic American trying to make a difference. God Bless America and Semper Fi!
View all posts by The Goomba Gazette →
This entry was posted in foolish people, Sports. Bookmark the permalink.