Clayton Lockett’s execution Tuesday night was halted after about 20 minutes due to an issue with a vein, the Associated Press reported. Not long after Lockett was deemed unconscious from the first of three drugs, he began “writhing on the gurney,” according to the Associated Press. He was declared dead 43 minutes after the execution began.

It wasn’t blotched all-together. He suffered and eventually die and maybe, just maybe he thought of what he did to his victims but I doubt it. 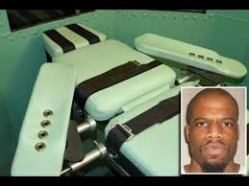 My heart bleeds for this killer. Did anyone ever stop to consider what kind of torture and agony his victim when through when he Lockett slaughtered a teenager and watching as she was buried alive?

It is unfortunate that most countries do not believe in and “eye for an eye.” I would think that if someone is so cold hearted and brutal to kill someone else in an unspeakable manner, they should be put to death the same way. That may be a cruel mentality and not prohibit or bring down the murder rate but that method would give some satisfaction to many people.

If some of the bleeding hearts that feel sorry for these killers were locked in a room for a couple of hours with them, let’s see how sympathetic they would be when they had to deal directly with the devil.

Were the victims supposed have any rights?