Too little too late

Cheney: Republicans need to look to new generation of leaders:

Dick Cheney said Sunday that Republicans need to look to a new generation of leaders as the party deals with poor approval ratings following the government shutdown.

That initiative should have begun long before Cheney had a chance to take off as the vice president. We would be in a lot better condition than we are now! 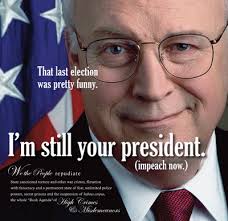 Whether this guy wants to admit it or not he is one of the major contributors to the financial problems we have in this country today. He was bound and determined to go to war regardless of what anyone said and he had a very big influence on George Bush.

The republicans’ will not see the presidency for many years to come; #1 because of their poor leadership and compliancy and # 2 the democrats will keep getting votes for the “gravy train” voters that can’t see the forest because of the trees. There is only so much water that can be taken from a well before it dries up.

COMMON-SENSE is the name of the game Addressing topics other bloggers shy away from. All posts are original. Objective: impartial commentary on news stories, current events, nationally and internationally news told as they should be; SHOOTING STRAIGHT FROM THE HIP AND TELLING IT LIKE IT IS. No topics are off limits. No party affiliations, no favorites, just a patriotic American trying to make a difference. God Bless America and Semper Fi!
View all posts by The Goomba Gazette →
This entry was posted in Opinion, Politics. Bookmark the permalink.